Thanks to its high precision of cut, the TFG classifying wheel with its support wheel makes an exact top-size limitation and a reduction of the fines portion possible. A hydraulic mechanism permits the classifier head to be raised and then swung off to the side through 180°, thus affording good access for cleaning and maintenance procedures.

Toner is a special product because it places extremely high demands on the particle size distribution, which must be particularly narrow and increasingly finer. Besides this, the resin blends are being formulated with progressively lower melting points to increase the speed of laser printers. Especially important is good accessibility for cleaning to minimize downtime during a color change.

In the case of jet milling, one takes advantage of the fact that as compressed gas exits a nozzle, it is accelerated to extremely high speeds. In expanding, the energy contained in the compressed gas in the form of heat is converted to kinetic energy. The speed of sound is initially a natural limit for the exit velocity.

But by using Laval nozzles, the exit velocity can be increased to above the speed of sound. Laval nozzles are characterized by their hourglass shape, which widens downstream of the narrowest cross-sectional point, the nozzle throat. The length of the divergent part of the nozzle is adapted to suit the operating pressure. Compressed air of 20°C and 6 bar overpressure is frequently used as the grinding gas, and delivers nozzle exit speeds of around 500 m/s.

As a result of drawing in gas and product from the fluidized bed, the speed of the gas jets sinks extremely rapidly after exiting the nozzles. Comminution is a result of inter-particle collision in the jets of air and also in the core area, i.e. the point where the opposing jets intersect. Jet mills are impact mills which are used to achieve maximum fineness values. Such particle sizes can only be obtained in connection with an air classifying step. Spiral jet mills have a static air classifier integrated into the mill housing, whereas fluidized bed opposed jet mills are equipped with a dynamic deflector-wheel classifier.

The fineness is set as a function of the classifying wheel speed. All-important is a high product loading of the nozzle jets in order to achieve a high concentration of particles and thus high impact probabilities. The patented Megajet nozzles were developed with this in mind. They consist of four small nozzles which as a result of their close proximity generate an under-pressure at their common center, and thus draw particles from the fluidized bed direct into the center of the nozzle jet. The product level in the machine is controlled by means of load cells or by monitoring the current loading of the classifier drive. 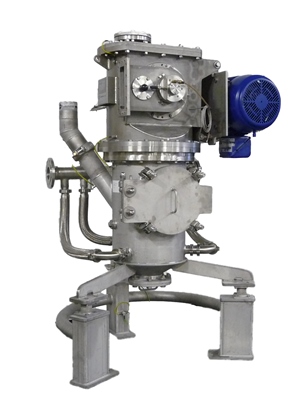