This article explains the basics of dry powder classification and describes some of the most common classification methods available for bulk solids manufacturing applications.

In ancient times, after threshing the harvest to loosen the edible part of the grain from the husk (or chaff), farmers would toss the grain into the air and the wind would separate the light chaff from the heavier grain. Today this process, called winnowing, is typically done by a combine machine that reaps, threshes, and winnows the grain in a single step in the field. Whatever the method, winnowing is a form of classification, or separating particles based on their physical characteristics (most commonly particle size or density). Modern manufacturers often require classification of bulk solid materials to make specific products or improve the characteristics or performance of materials.

Bulk solids classifying machines operate based on a variety of different technologies, and their specification and effectiveness typically depend on the characteristics of the material being classified, the target particle size of the end product, and how the material is to be used. For example, salt requires very different particle characteristics if it’s going to be used to melt snow and ice on wintry roads than if it’s going to be used to season your dinner. Some of the most common classifier types are vibratory and rotary screeners, which classify materials by particle size, and cyclones, elutriation classifiers, and dynamic air classifiers, which classify materials by particle density or mass.

Particle size classification separates particles into two or more groups with maximum and/or minimum particle sizes (or cut points). Manufacturers use cut points as a basis for differentiating one product from another throughout the bulk solids processing industry, from size reduction to classification.

For example, a company manufacturing cornstarch may require a maximum particle size of 75 microns. This cut point (also called the top size or top cut) can be expressed as a D97 of 75 microns. This means that, after classification, 97 percent of the particles measure 75 microns or less in diameter.

An application may also have a target minimum particle size (also called the bottom size or bottom cut) to minimize the percentage of particles that are smaller than desired. This is often expressed as the D10 cut point. For example, a D10 of 15 microns means that, after classification, 10 percent of the particles measure less than 15 microns in diameter.

Vibratory screeners. The most frequently used size classification device is the vibratory screener, as shown in Figure 1. A vibratory screener sieves (or screens) the material to be classified through a vibrating screen or perforated steel sheet with openings that suit the desired particle diameter. Screeners efficiently classify materials with particle sizes larger than 100 microns, and the screens are typically stainless steel wire mesh or synthetic woven mesh. 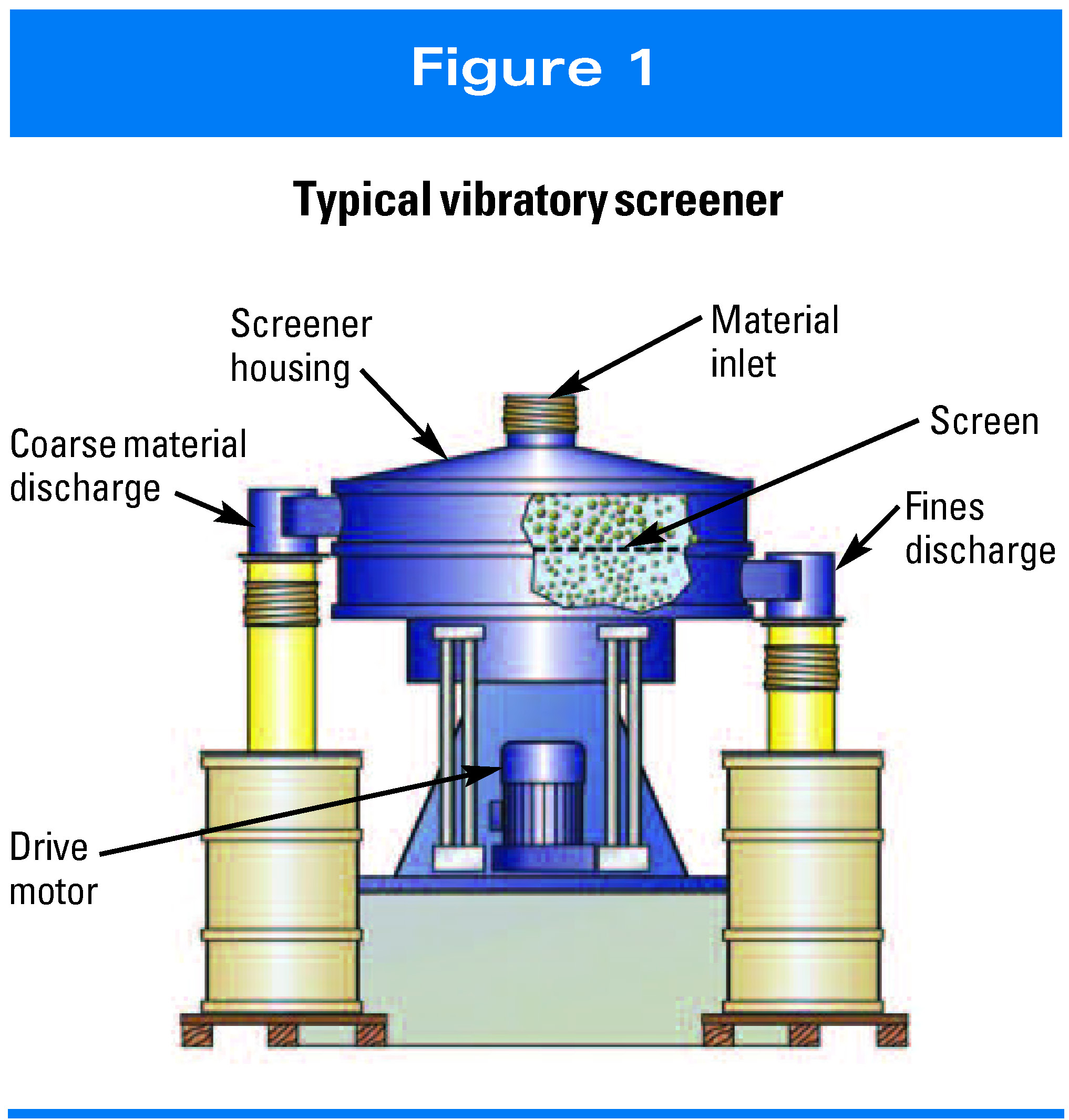 Depending on the application, oversized particles may be returned upstream for further size reduction. For applications that require the coarse, oversized particles for the end product, the off-spec fine particles that fall through the screen openings are either discarded or repurposed. Many applications require more than one cut point, so most vibratory screeners can be configured to have multiple screening decks with successively smaller screen openings. This yields several particle-size ranges that are each collected separately.

Screeners represent relatively simple technology but are subject to blinding, which is where slightly oversized or oddly shaped particles become entrapped in the screen openings. This blocks material flow through the screen, which slows the screening process and may affect upstream operations. To prevent screen blinding, many screeners include an antiblinding mechanism. The most common antiblinding mechanism is a perforated deck with bouncing balls, discs, or rings set beneath the screen deck. During operation, the screener’s vibration causes the balls, discs, or rings to continually impact the screen from below, dislodging any trapped particles from the screen openings.

Other antiblinding mechanisms include a stream of countercurrent airflow that blows up through the screen and dislodges trapped particles; brushes that sweep across the screen and remove particle buildup; and ultrasonic devices that impart high-frequency, low-amplitude vibration to the screen and decrease the likelihood that particles will get stuck in the screen openings. Depending on the application, these mechanisms may be used individually or in combination to ensure efficient screening.

Rotary screeners. For materials with difficult flow properties, a rotary screener can provide incrementally improved performance compared to a vibratory screener when targeting a single cut point. A rotary screener maintains sufficient throughput with a poorly flowing material by using centrifugal force to mechanically disperse the material and drive it up against the inside of a rotating cylindrical screen. The centrifugal force helps fine particles pass through the screen openings for collection while larger particles travel horizontally along the screen surface from the feed inlet at one end of the cylinder to a coarse material discharge at the opposite end.

In some cases, a material’s particles may be uniform in size but have different densities, making some particles heavier than others. A screener will be unable to classify such a material because the particles will fit through the same size screen openings and remain mixed together. Separating materials by particle density requires different classification mechanisms.

Cyclones. A cyclone uses vortex airflow to separate materials into two fractions: fine and coarse. Material is pneumatically conveyed into the cyclone, which is a cylinder with a tangential inlet that creates a vortex. The higher the air velocity, the higher the vortex force for separating fine and coarse particles. As the air-material mixture swirls around the cyclone, larger, heavier particles are forced to the cyclone wall, where they drop out of the airstream and collect in a hopper at the cyclone’s base. At the same time, lighter, fine particles remain airborne and exit with the airstream through an outlet tube at the top of the cyclone.

A cyclone safely and efficiently handles a diverse range of materials with consistent production yields and can be a highly economical solution for many classification applications. For example, cyclones are commonly used to separate wood chips from sawdust and other types of sawmill waste for sale as mulch. A cyclone can deliver 95 percent or better collection efficiency when classifying particle sizes greater than 10 microns. The cyclone dimensions and outlet-tube diameter, along with the air velocity, material load, and other parameters, determine the cyclone’s cut point and collection efficiency. While minor adjustments to a cyclone’s operating parameters are possible, a cyclone is typically designed to achieve a single specified cut point and can’t be significantly changed after installation. 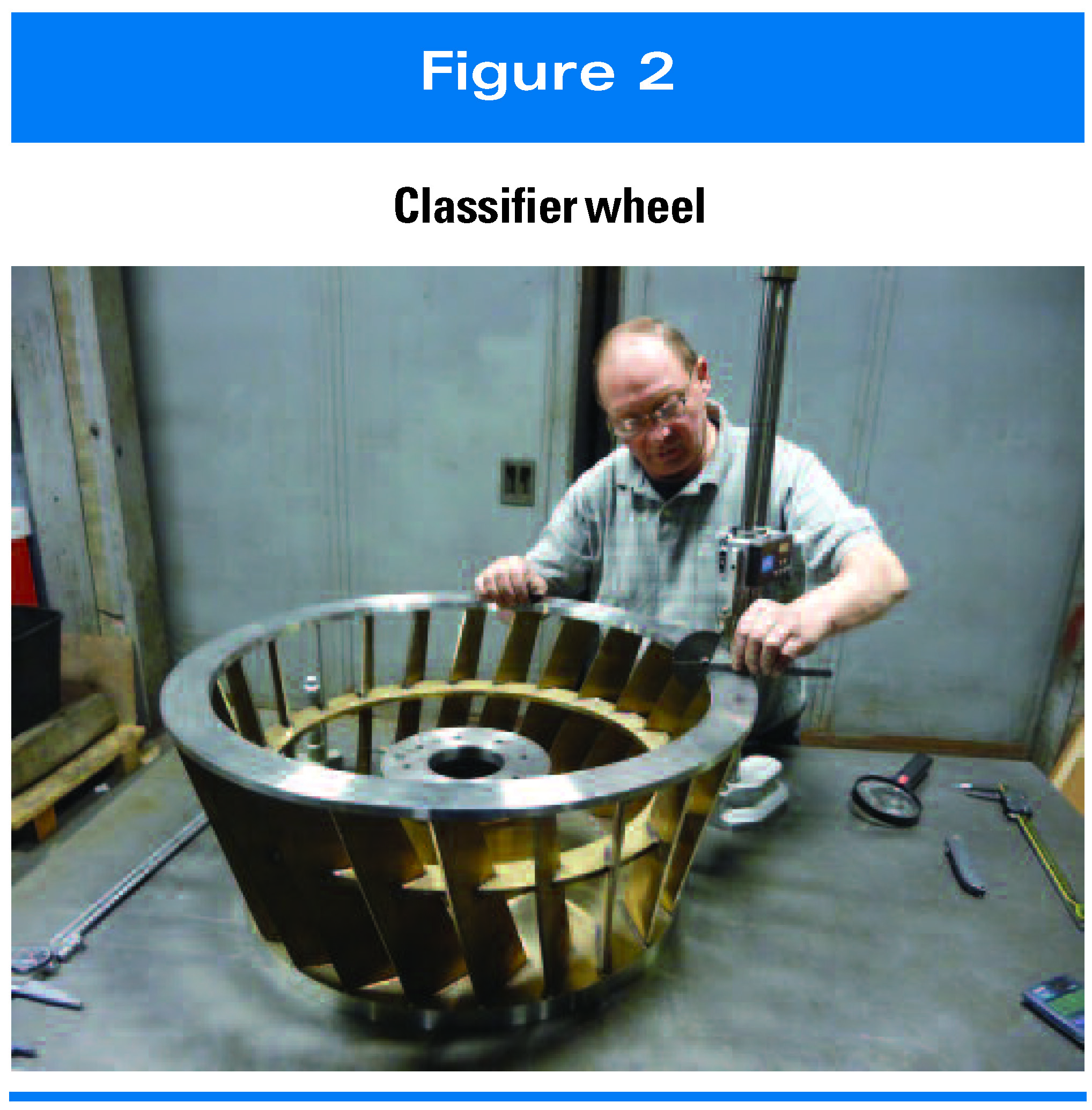 An elutriation classifier consists of a vertical chamber with an airstream flowing upward through it. The material to be classified enters the chamber through a side inlet, and the airstream carries lighter particles up through a fines discharge at the top while heavier particles fall to a coarse material discharge at the chamber’s base. By adjusting the classifier’s operating parameters (such as air velocity), you can control which particles rise and which particles fall to determine the cut point. However, since particle volume and mass are also factors, elutriation can encounter problems classifying particles that share a uniform size but have different densities or share a uniform density but have different surface areas.

Also, if the classifying chamber is a straight pipe, the airflow becomes laminar (linear and smooth), making it more difficult for coarse particles to drop out of the airstream. The latest elutriation classifiers address this problem by replacing the straight piping with zigzag channels that force the air and material to move in alternating directions. This creates turbulent airflow, which allows coarse particles to drop out of the airstream at each turn of the channel. Elutriation classifiers are well suited for particle sizes from 0.3 to 10 millimeters that can’t be sieved effectively due to their dissimilar particle densities or other characteristics.

The classifier consists of a classifying chamber (or housing) with an air-material inlet, a coarse material discharge, and an air-fines discharge. Inside the chamber is a rotating classifier wheel with vanes (or blades), as shown in Figure 2.

During operation, the conveying airstream carries fine particles through the gaps between the vanes of the rotating classifier wheel and out through the air-fines discharge, while coarse particles are rejected and settle on the housing wall. The cut point (dt) is determined as shown in Figure 3. 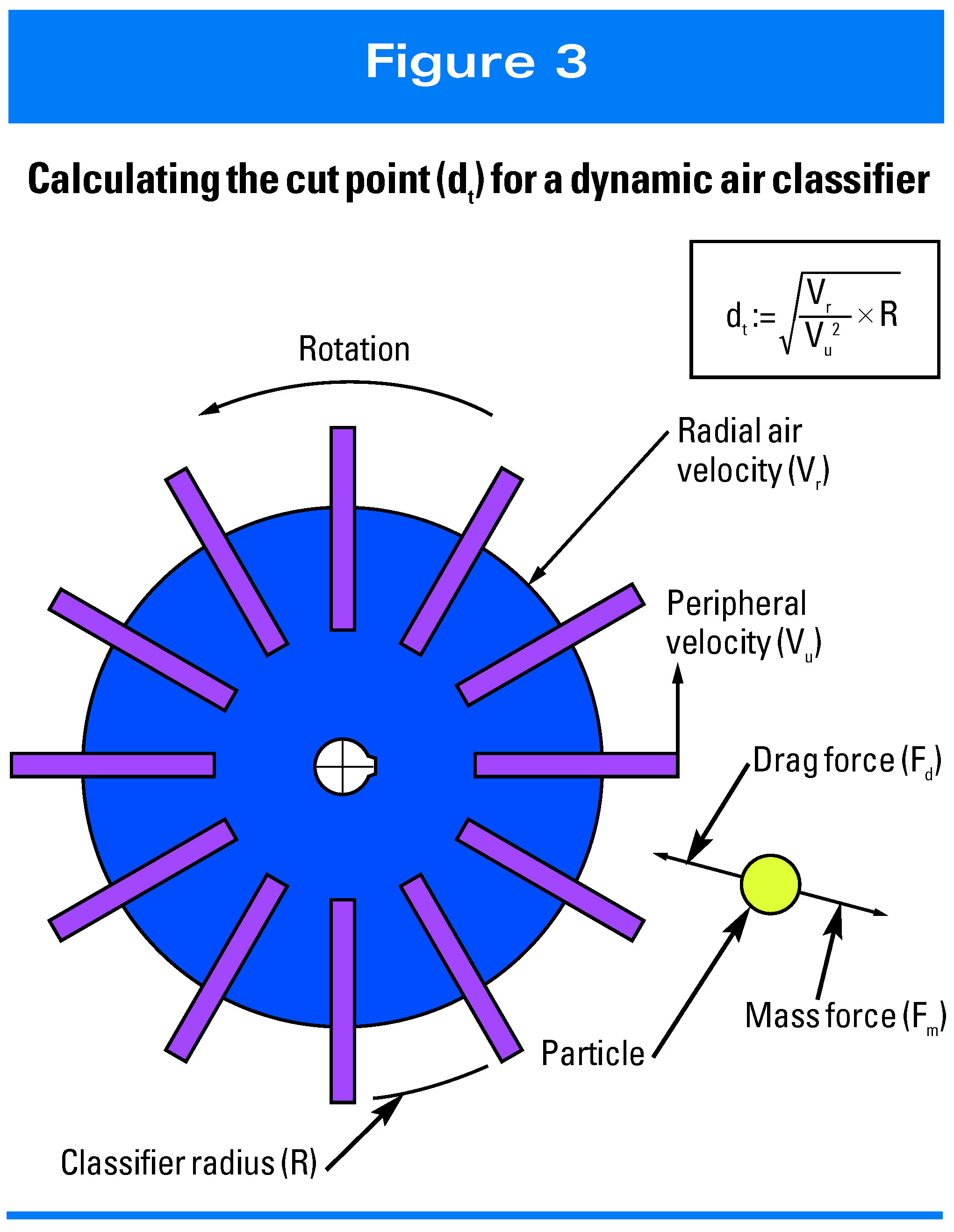 A secondary, tangential airstream recirculates and uniformly distributes rejected material back into the classifying zone. This helps to break up any agglomerates and wash off any fines adhered to coarser particles. The heavier particles eventually drop out of the airstream and exit through the coarse material discharge at the housing’s base. The classifier’s operating parameters, including the wheel speed and airstream velocity (as well as the size and configuration of the classifier wheel), may be adjusted to meet given particle-size targets.

Regardless of the type of material to be classified, the latest classification systems include control automation to maintain consistent operating parameters and reliably yield particle sizes in the desired range.