This video requires you to register/login before continuing. 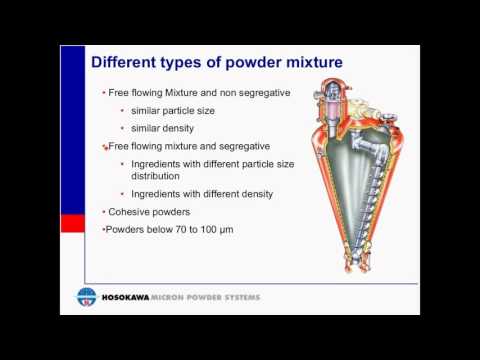 Powder mixing is an important part of the powder processing industry. Often times, powder products are actually the result of two powders mixed together. Without an effective means of mixing these powders, those products would not exist. There are three types of free-flowing mixing. They are:

Conical mixing involves the gentle, low-intensity mixing of segregative, free-flowing powders through the use of a cantilevered screw. This kind of mixing consumes very little power, and generates very little heat. However, heating and cooling, along with the addition of a liquid, can be conducted during this kind of mixing.

Impact mixing causes materials to separate and then come together, mixed, through the use of a series of mixing blades being turned in a mixing chamber. This type of high-intensity mixing allows for agglomeration to be conducted during the mixing, along with the ability to heat, round, and bond the material.

If you wish to learn more about powder mixing and Hosokawa’s mixing applications, be sure to watch the full webinar.